“What a rotten film, all we meet are crazy people.” 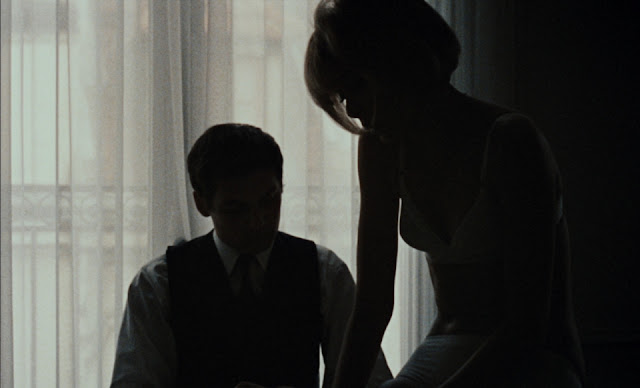 “A critic once asked why there was so much blood in Pierrot. That’s not blood, answered Godard, but red. Equally, his films are not stories photographed, but a record of actors playing parts. The focus of his films is the distance between camera and actors and between screen and audience.”
- David Thomson, The New Biographical Dictionary of Film (2004 Edition)

“This is not a Hollywood movie. In a Hollywood movie, after the movie is over, there’s nothing more. There is no relationship between the screen and the spectator. There’s just duration. If you don’t like it, you go to sleep, the way I do. But in other movies, you can’t forget about it. You have to talk about it afterward.”

As much as I hate to lead with a David Thomson quote1, I think the first bit sums up everything I dislike about the motion picture exercises of Jean-Luc Godard. The second quote speaks to everything I admire about Godard (in theory) and what keeps me coming back to his films, however infuriating I find them.


Truth be told, I haven't seen enough Godard to call myself an expert. In fact, the film we're discussing here is only my fourth full-length Godard. I hereby relinquish any claim to being a Person Who Knows What They're Talking About and suggest you leave if you're searching for scholarly, depth-plumbing insights into the Marxist dialectics at work in WEEKEND. This is going to be more Joe Sixpack than Joe Dietzgen2.

As much as WEEKEND is about anything, it's about a race toward annihilation. The usual suspects -- soulless bourgeoisie -- are here represented by Corinne and Roland Durand (Mireille Darc and Jean Yanne), a couple on their way to visit her parents in the hopes of killing them and collecting the inheritance. Before they leave, we witness each muttering independently about their own plots to kill each other after they make away with the loot.

It isn't long before Godard is blinking his infernal title cards across the screen. I've never cared for this Godard trope; these punny title cards are the kind of humor that exists only to prove to the purported humorist how funny his brilliant mind is. According to the first of many of these, WEEKEND is "a film adrift in the cosmos" and "a film found in a garbage dump." Tee hee. 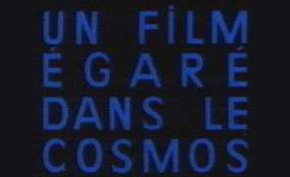 (As always, I apologize for the inconsistent quality of the frame grabs. Still singing the Inability To Grab Frames From Blurays Blues.) 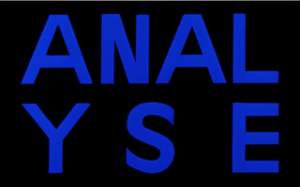 These tired telegraphs notwithstanding, the visual and aural components of the film are, as always, impeccable. From the first frame, Godard stuffs his film with beautiful women, clean architectural lines, and an agitating sense of foreboding. The carefully constructed soundscape put together by Rene Levert and Antoine Bonfanti hints at the doom to come, with its droning mechanical sounds and screeching tires. One of the first shots is a God's-eye-view (from the Durands' apartment patio) of a group of well-dressed yuppies beating each other senseless in the aftermath of a car accident (which results in little more than a broken headlight).

Godard's trusty cinematographer Raoul Coutard is one of the most expert framesmiths to have graced us with his talents and -- in terms of sheer cinematic audacity -- WEEKEND is incredibly rewarding. There are several set pieces that play like avant-garde versions of the perfectly choreographed action scenes in, say, a MISSION: IMPOSSIBLE or BOURNE film.

The first of these is an apparent swipe at Ingmar Bergman's PERSONA; in a deadpan voice, Corinne recounts a kinky sexcapade to Roland. The scene is a single shot, framed in psuedo-noir chiaroscuro (see the top-most image). Coutard slowly pushes in and pulls out throughout the tawdry tell-all while Antoine Duhamel's score surges with overdramatic menace (reminiscent of Pink Floyd's Sysyphus Part One). The point of the long, increasingly perverse monologue? I'm assuming it's the same apparent modus operandi of most of WEEKEND: to expose the decadent, amoral lives of the bourgeoisie.

Once Raoul and Corinne hit the road, they encounter WEEKEND's second (and most famous) awe-inspiring set piece: the nine-minute tracking shot of a traffic jam. Coutard's camera swoops past car after car, each one its own little microcosm. An old couple playing chess, men transporting lions in cages, children playing beside the cars, and -- of course -- a fair share of highway carnage: 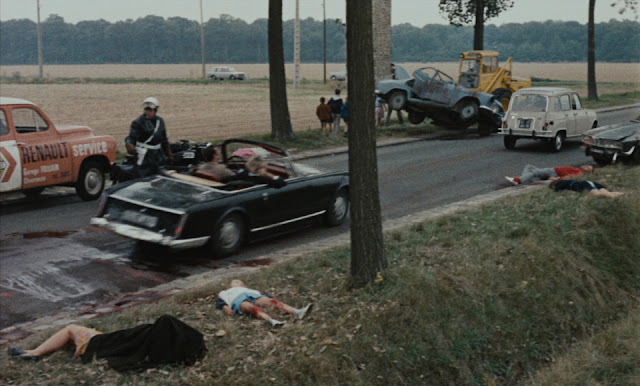 The sequence is justifiably revered (and can be seen in near-entirety here, albeit in much lesser quality than Criterion's sparkling Blu; Criterion has also put together a cool slideshow of the scene here) and is another great example of the beautiful match that Godard and Coutard made. I couldn't help but think of it as an adult version of Richard Scarry's vehicular tapestries (again, my references skew a bit dumber than Godard’s): 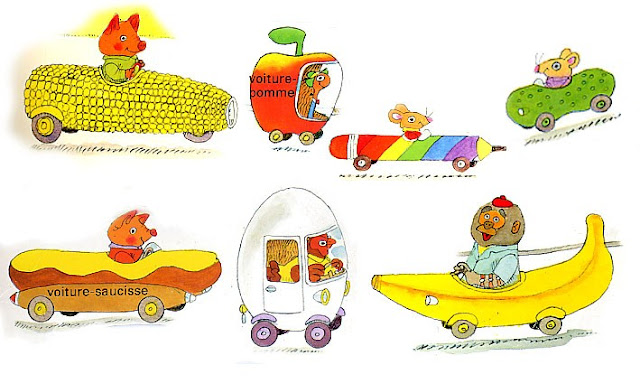 The couple are soon in a crash of their own and forced to go on foot: 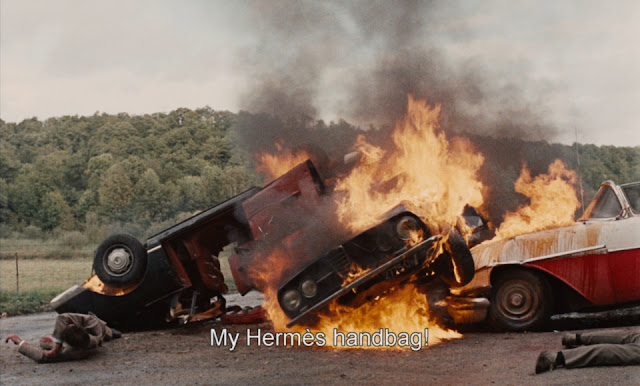 The above caption is yet another example of Godardian humor: the car becomes a fireball and the woman's first thought isn't for her injured husband (or even herself) but for her designer handbag! Tweaked a little, Henny Youngman could use this material for one of his "women: who needs 'em?!" routines.

About a third of the way into the film, then, the couple is forced to wander on foot and experience a series of vignettes populated by people who are Obvious Symbols of Certain Societal Trends. Godard aims for Lewis Carroll/John Bunyan allegorical territory and falls dreadfully short of the mark. The film becomes a descent into hell for our indulgent, self-centered antiheroes. But this was already handled to an expert (if somewhat less visually dazzling) degree by Bunuel in THE EXTERMINATING ANGEL. 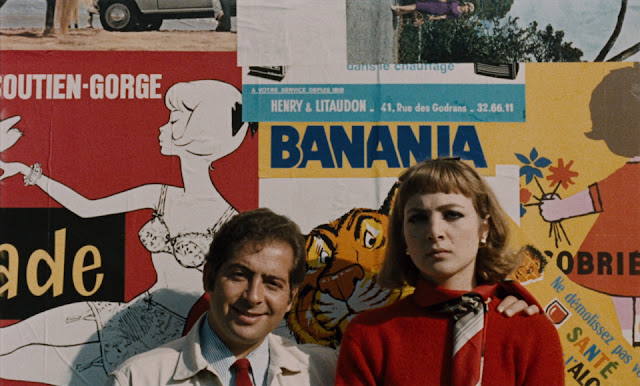 The literary and philosophical references begin coming at a hyperactive pace (here’s hoping that Blus eventually include hyperlink footnotes so that one can make better sense of this high culture hash). The best way to understand it all (unless you happen to have read the exact same books that Godard has) is to watch Kent Jones' fascinating visual essay that accompanies the Criterion disc. Jones unlocks the film in such a way that it almost made the experience retroactively enjoyable. Still, for all of its rich cinematic delights, WEEKEND degenerates too quickly into a fevered Marxist sermon, indulging in the on-the-nose pedantry that (in the hands of lesser filmmakers) is usually the province of bad student films.


- My favorite of WEEKEND's bravura set pieces is also probably the most pointless of all of them. The couple comes to rest in a French village where a man sits at a piano and waxes poetic on the virtues of Mozart and his Piano Sonata #18. While he plays the piece and pauses to expound, the camera gently does three 360-degree pans of the village, revealing a docile, bucolic picture that is a pleasant contrast to all the twisted, burning metal and human carnage that precedes (and follows) the scene. It's a beautiful moment.

- Also great is a bizarre aside, delivered by "Emily Bronte" (Blandine Jeanson), about the life of a stone she finds on the side of the road. It's a poignant soliloquy about eternity, the nature of time, and man's insignificance. It put me in mind of one of my favorite Godard vignettes, the famous universe-in-a-cup-of-coffee bit from 2 OR 3 THINGS I KNOW ABOUT HER. For all my frustrations with him, Godard can occasionally hit a higher truth (almost in spite of himself).

- As much as I like to knock Godard's "look at me" approach to humor, he has his moments. This shot was rather brilliant: 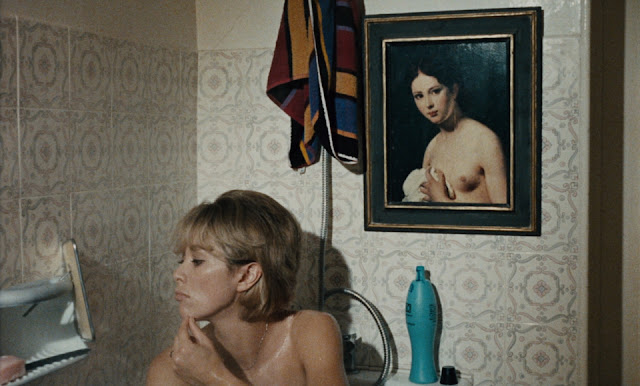 Godard frames this shot of Corinne so that, for all her scrubbing and suds-ing, her breasts are never in view. Meanwhile, a very tasteful portrait of a likewise bare-chested woman hangs over her shoulder in full view, toying with the viewer's perception of nudity (while making a comment on the power of moving images over their static counterparts). It's a moment where his droll egghead-ery worked for me.

- Here's some of that "red" Thomson mentioned: 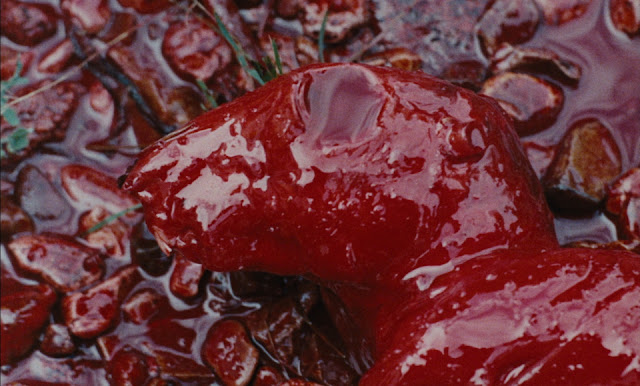 That's a dead, skinned rabbit awash with the blood of Corinne's recently bludgeoned mother. Near the end of the film, a revolutionary character remarks "the horror of the Bourgeoisie can only be overcome with more horror." And Godard's film is chockablock with horrors, including the actual on-camera executions of a large sow and a chicken. People sensitive to violence against animals are hereby warned.

- Here's the title card that ends the film: 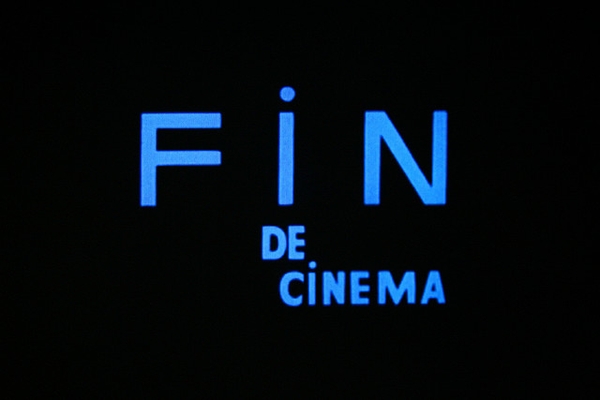 Again: tee hee. Of course, this was the last film Godard made before his "radical phase," where he eschewed any semblance of narrative and just made full-blown essay/propaganda pieces.

1All credit and respect due to the man and his hard work creating Biographical Dictionary, he is outright bonkers in the leaps of logic he takes to arrive at some of the entries. I don't think he's a willful, studied contrarian like Armond White. But, just for instance, here's his inscrutable take on Lars von Trier:

"Von Trier is like a seven-year-old serial killer whose bombs and weapons have all gone into his eye."

I think I understand, ultimately, what Thomson is saying there (Lars has a sick vision of the world), but his verbal contortionist act isn't helping his case.

2And speaking of Marxism: my gut reaction to Godard stems from his vigorous championing of Maoism, starting in the mid-sixties and moving well into the seventies. That he would keep that torch burning in spite of everything that was known then (and certainly now) about the genocidal mania that accompanied the implementation of his pet ethos is morally reprehensible. So that's a major facet of My Godard Problem.

Posted by ptatleriv at 7:31 PM

Labels: Criterion, France, in over my head, Jean-Luc Godard, Maoism, more than I can chew, Weekend